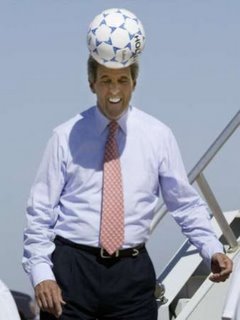 http://tinyurl.com/yhy7ly
What a weiner boy. The Swifties gotta be shakin' in their boots.
"If you do run for president -- and I do hope you do -- fight like hell," one person at the fund-raiser told him.
"I'm in a fighting mood," Kerry responded. "We -- together -- lost to two lies: the lie about the war in Iraq, and the lie about me personally. And if you don't think that puts me in a fighting mood, you don't know John Kerry."
Posted by Jim Riley at 2:37 PM