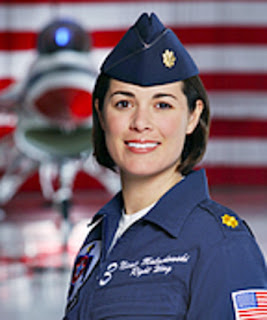 Female Thunderbird pilots a first for Air & Sea Show: South Florida Sun-Sentinel: "As they roar through their hair-raising maneuvers at this year's McDonald's Air & Sea Show, there will be something distinctly, well, feminine about the Air Force Thunderbirds.

For the first time since the squadron started flying in the seaside extravaganza in 1995, not just one, but two female pilots will be at the controls of the unit's F-16 Fighting Falcons."
Posted by Jim Riley at 3:46 PM