The Reverend Al does have a history 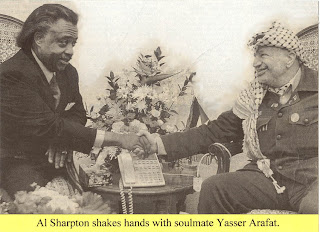 Al Sharpton: The Democrat's David Duke by Jeff Jacoby -- Capitalism Magazine: "1995: When the United House of Prayer, a large black landlord in Harlem, raises the rent on Freddy's Fashion Mart, Freddy's white Jewish owner is forced to raise the rent on his subtenant, a black-owned music store. A landlord-tenant dispute ensues; Sharpton uses it to incite racial hatred. 'We will not stand by,' he warns malignantly, 'and allow them to move this brother so that some white interloper can expand his business.' Sharpton's National Action Network sets up picket lines; customers going into Freddy's are spat on and cursed as 'traitors' and 'Uncle Toms.' Some protesters shout, 'Burn down the Jew store!' and simulate striking a match. 'We're going to see that this cracker suffers,' says Sharpton's colleague Morris Powell. On Dec. 8, one of the protesters bursts into Freddy's, shoots four employees point-blank, then sets the store on fire. Seven employees die in the inferno. "
Posted by Jim Riley at 2:05 PM