Heck, if yer brought up to hate America yer gonna hate America. No matter how "smart" the libs tell you you are----Ronan Farrow links Thanksgiving to genocide 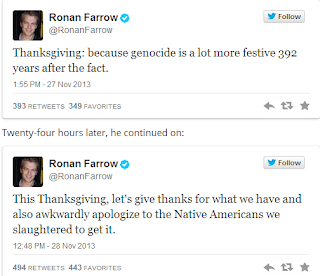 Ronan Farrow links Thanksgiving to genocide | The Daily Caller:
"Ronan Farrow, alleged genius and MSNBC’s newest host, took to Twitter to share some thoughts about Thanksgiving on Wednesday:
Farrow is the 25-year-old son of Mia Farrow and Woody Allen, though there is some speculation that his father may actually be Frank Sinatra. He has impressive professional and academic credentials, graduating from college at 15 and Yale Law School at 21 before being named a Rhodes Scholar at 23. He also allegedly worked for Hillary Clinton and the late Richard Holbrooke at the State Department.

But Farrow’s public comments have not lent weight to his genius reputation. Appearing on MSNBC in October, he declared – to much ridicule — that Bill and Hillary Clinton “represent a style of honesty that the public craves.” With his Thanksgiving tweets, he gives off the impression he is nothing more than a run-of-the-mill leftwing hack.