These are evil people with enormous power. Life on GLAAD's Blacklist 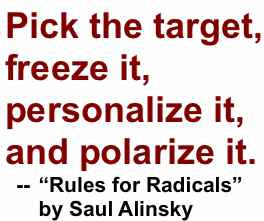 This writer is gay.
He had the courage to speak out and this is the response from the thugs at GLAAD.
Do we really want to empower these bigots?
Articles: Life on GLAAD's Blacklist

In case you don't know the full extent of GLAAD's fascism, let me tell you what GLAAD did to me.

I won't hyperlink this, but if you go to GLAAD's website and seek out their "commentator accountability project," you will find my name.
This is GLAAD's blacklist.
Within hours of GLAAD's publication of my addition to the list, which amounts to an excommunication from polite society, an e-mail was sent to the president of my university, along with dozens of other high officials in California, with the announcement: ROBERT OSCAR LOPEZ PLACED ON GLAAD WATCH LIST.

The e-mail stated clearly that as a result of my being placed on this list, I would never get a direct interview in the United States.
(Whoever "they" are, they made good on the threat, because when I was brought onto Al Jazeera, they made sure that I was the only one critical of gay adoption, versus two hosts and two other panelists who were for it, and the host cut my microphone.)
According to the press release sent to my university, any media outlet introducing me would be bound to introduce me as an "anti-gay activist" certified by GLAAD as a bigot.
When I read the claims of this e-mail, I wondered if this would be true -- would media in the United States really introduce me by saying I was certified as "anti-gay" by GLAAD?
Posted by Jim Riley at 3:00 PM