'I'm Lost Now': Can Ferguson's Businesses Ever Rise From Rubble? 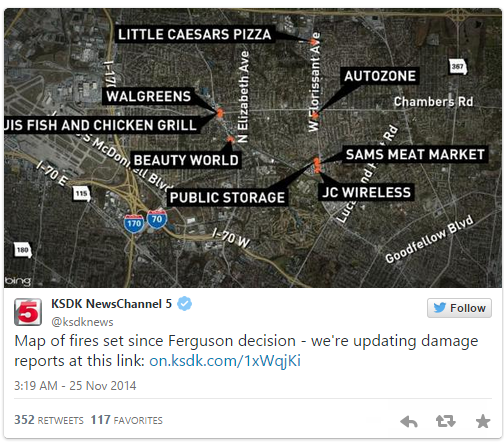 "To be honest with you, I'm lost now," Yaacoub told NBC News after touring the charred shell that once was Sam's. The exterior brick walls are the only salvageable chunks. The roof is gone. "I'm not sure money-wise. Money-wise, it's just too hard.
"I had to borrow $700 to buy some wood, just to put the boards together to close up where (the rioters) came in from, to close the building. It's just too much, you know," added Yaacoub, who carries insurance coverage for fire damage but isn't certain when or how much he might be paid to begin a rebuild. A friend launched a fund to help pay for the market's restoration.
Posted by Jim Riley at 6:00 AM