Iran Bombshell: It Will Inspect Itself

Iran Bombshell: It Will Inspect Itself | The Counter Jihad Report:
"This week brought the stunning news that Senator Tom Cotton (R., Ark.) and Representative Mike Pompeo(R., Kan.) had discovered, during a meeting with IAEA officials, the existence of secret side deal between the IAEA and Tehran — a side deal that will not, like the main nuclear agreement, be shared with Congress. 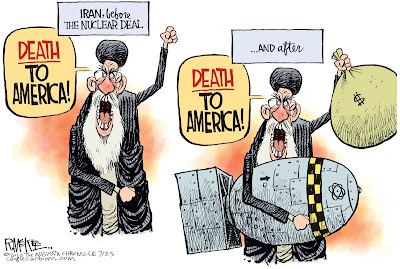 So critics of the agreement were understandably eager to hear an explanation from Secretary of State John Kerry when he and other senior administration officials testified before the Senate Foreign Relations Committee yesterday.
The hearing produced a new bombshell:
In its investigation of Iran’s past nuclear-weapons-related work, the IAEA will rely on Iran to collect samples at its Parchin military base and other locations.
As a former intelligence analyst experienced in the collection of environmental samples for investigations of weapons of mass destruction, I found this allegation impossible to believe when I heard Senator James Risch (R., Idaho) make it yesterday morning..."