Well, he would if he could...-----President Obama Nominates Canaanite God Molech To Supreme Court

“Molech, the fiery devourer of the young, is more than qualified for the position,” Obama said in a White House press conference at which he introduced the idol. 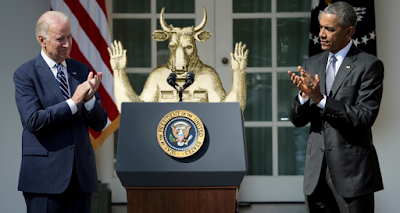 “Furthermore, he has proven his advocacy for women’s rights by calling for the barbaric sacrifice of babies—any time, for any reason—as acceptable and appeasing offerings.

He’ll fit right in on the bench.”
The President further revealed that he and his cabinet had sifted through over three hundred qualified candidates as contenders to fill the seat on the court created by the death of Justice Antonin Scalia, all of whom were ancient pagan gods who demanded child sacrifice to satiate their anger or to grant prosperity.
“In the end, it came down to Tlaloc of the Aztecs, the malevolent spirits of the Mayans, and of course, Molech the annihilator of babes.”

He went on to state that while any of the gods who demanded child sacrifice would have been impeccable candidates to steer the court’s decisions on key issues like abortion, Molech’s consistent track record of obliterating society’s offspring gave him the edge."
Posted by Jim Riley at 5:30 PM