America’s worsening retirement problem:
"When a crisis ends, not everyone recovers equally.
And in the wake of the 2008 financial crisis, though the stock market has long recovered, there is an important group that was hit badly – and hasn’t bounced back. 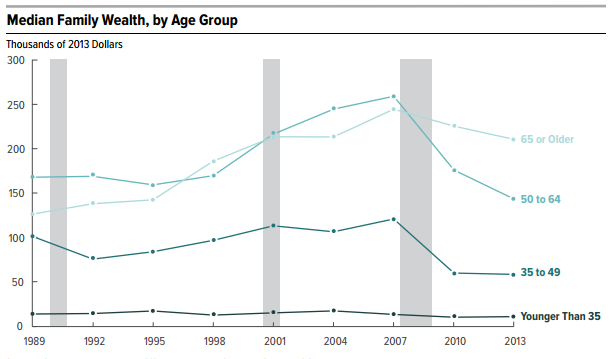 This is Americans nearing retirement.
People aged 50-64 are supposed to be building wealth and getting ready for retirement.
But the Congressional Budget Office released a new report on wealth last Thursday that found that median family wealth dropped for Americans aged 50-64 from around $250,000 in 2007 to just under $200,000 by 2010—and then, troublingly, continued to fall to around $150,000 in 2013.
That’s a 40 percent drop in six years."