Fact-Check: No, the Clinton Foundation Did Not 'Spend Ninety Percent' of Money Donated on 'Programs'

Fact-Check: No, the Clinton Foundation Did Not 'Spend Ninety Percent' of Money Donated on 'Programs' - Breitbart:
"Democratic presidential nominee Hillary Clinton said during the third presidential debate, “We at the Clinton Foundation spend ninety percent — ninety percent — of all the money that is donated on behalf of programs of people around the world and in our own country.”
Fact-Check: FALSE
Indeed, Clinton’s “ninety percent” claim is false according to her troubled charity’s own tax filings.
Peter Schweizer, president of the Government Accountability Institute, Breitbart News Senior Editor-at-Large, and author of Clinton Cash said the Clinton Foundation has spent as little as six percent of its total income on actual charitable endeavors.
“If you actually look at the numbers of their filings and 990s, that’s what it indicates,” Schweizer said last month in an interview with SiriusXM host Alex Marlow on Breitbart News Daily. 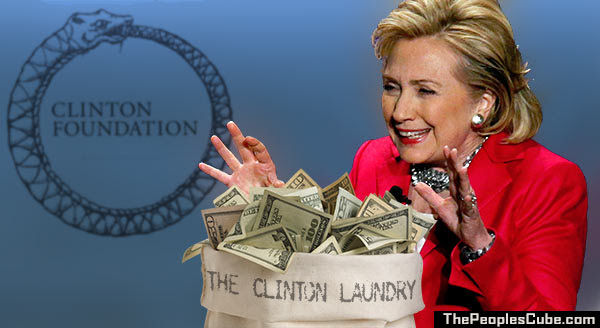 “The Clinton Foundation will say, ‘We assisted or facilitated in 100,000 kids getting immunizations.’ Well, okay, what does that mean?
And they don’t really tell you.
They don’t really explain to you how it works.”
“So the number is absolutely correct, that six percent goes to other charities,” Schweizer continued. “The other 94 percent is in this stew of marketing, and management, and travel expenses, and sort of all these obscure things, that it’s really hard to dissect what is the end result of that 94 percent being spent.”
What’s more?
Political analyst Sean Davis, the co-founder of The Federalist and a former adviser to Sen. Tom Coburn and Gov. Rick Perry, examined the Clinton Foundation’s 2013 tax filings and found that “Hillary Clinton’s non-profit spent more on office supplies and rent than it did on charitable grants.”
“The Clinton Foundation spent nearly $8.5 million–10 percent of all 2013 expenditures–on travel,” Davis contends.
“Nearly $4.8 million–5.6 percent of all expenditures–was spent on office supplies.”"
Posted by Jim Riley at 5:30 PM