Lara Logan tells riveting untold story: My Benghazi report was buried to protect the Obama admin and Hillary Conservative News Today
"In 2013, then-CBS reporter Lara Logan had an investigative report on the 2012 Benghazi terror attack that was buried and “discredited,”... the report was disparaged because it was critical of the Obama administration’s failure to come to the defense of Ambassador Christopher Stevens and his compound when it was attacked by Islamist terrorists.
Stevens and three other Americans were killed in the attack on September 11, 2012... 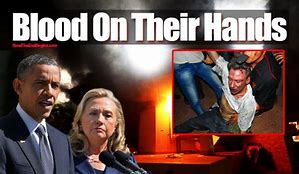 Go to video!-Video by Fox News
...“What they were trying to do was bury the substance of that story,” she added.
Logan went on to describe the horrific moment when Stevens and others realized that “the cavalry” wasn’t coming to help them.
“Greg Hicks, Chris Stevens’ deputy, looked at us on ’60 Minutes’ and he said what he had said on ‘the Hill’ but it was much more powerful in our cameras when he said that he asked the defense attache, just a few minutes into that attack, if the cavalry was coming.
The defense attache looked at him … [Hicks was] the last person to speak to Chris Stevens.
When Chris Stevens was under attack, a terrorist attack in his compound, he called Greg Hicks.
Greg Hicks looked at the defense attache and he said, ‘well?’ [The defense attache responded] ‘I’m sorry, Greg, the cavalry ain’t coming.'”
She continued, “Greg Hicks said, ‘I felt sick in the pit of my stomach because those of us who go out on the end of the line for our country, we believe our country has our back,’ and in that minute, in that moment, I knew they didn’t.”
She said Hicks looked at the defense attache and said, “We better tell the boys at the annex.”
“Two of those boys died that night,” she said..."
Read all!
Posted by Jim Riley at 1:30 PM