Tucker Carlson: When Dems blame Trump for the border crisis and migrant deaths, they are 100 percent lying | Fox News

Tucker Carlson: When Dems blame Trump for the border crisis and migrant deaths, they are 100 percent lying | Fox News: 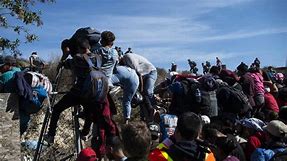 It's interesting to see the Democratic candidates for president all gathered together because you get a sense of what the Democratic Party cares about, what its priorities are. And this season, the candidates will be trying hard to become the most extreme on the question of immigration. Which one can attack the idea of borders most aggressively?
Keep in mind it was only a few months ago that as a group, they were telling you there was no crisis, at all, on the border. In fact, they were saying it was "manufactured" by the Trump administration.
Shills and liars and dumb people. Joe Lockhart coming out of retirement to lie to you. "It's a manufactured crisis." That wasn't true then, it's definitely not true now. 100,000 people estimated to be streaming into this country illegally every month, many from as far away as Africa. The crisis is not manufactured. It's demonstrably real. Even Democrats recognize that now.