'This is satanic': Limbaugh explodes on dark, new strategy to defeat Trump - WND

'This is satanic': Limbaugh explodes on dark, new strategy to defeat Trump - WND: 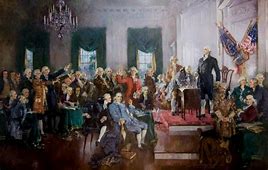 The most powerful forces in American news media are in a desperate “panic” because of Donald Trump, and have new unleashed a “satanic” strategy to make sure the president is not re-elected in 2020, says talk-radio giant Rush Limbaugh.
On his Tuesday broadcast, the popular political analyst unleashed a scathing attack on the New York Times and Washington Post, saying the rest of the national media would follow like puppy dogs with the new claim that the true founding of the U.S. came not in 1776, but in 1619 when the first African slaves intended for sale were brought to Virginia.