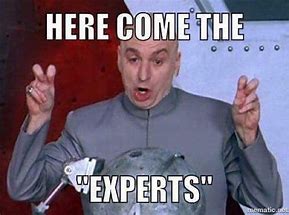 Op-eds criticized them as buffoons. Locals cracked jokes about them being in the Mafia. An arsonist burned down the barn housing their winery. Farmers who had planted French-hybrid vines spoke out against them. Officials viewed them with suspicion—as if the endeavor were actually a ruse to undermine the East Coast’s so-called wine industry or mislead local farmers.
When Virginia’s commissioner of agriculture ascertained what was happening, he summonsed Rausse to a conference room in Richmond.

...Rausse says he did not like being told what he couldn’t do.

He then went on to make lots of award-winning Virginia wines, and in the process almost single-handedly jump-started quality East Coast winemaking.
I very much doubt our experts in any field have gotten smarter, better informed, or wiser in the last 40 years.
Or as Heinlein wrote just a few years before Rausse was told what he couldn’t do, “Always listen to experts. They’ll tell you what can’t be done, and why.
Then do it.”--Posted by Stephen Green"
Posted by Jim Riley at 1:30 PM