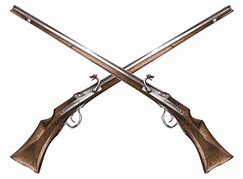 A house key shaped like a gun, a Pop-Tart eaten by a student into the shape of a gun, a gun-shaped logo on a pencil, a shirt and even a "hand gesture" have stirred controversy.
Even was a cloud shaped like a gun drew attention.
Now, flat pieces of steel attached to a fence in Port Angeles, Washington, are causing problems.
They are silhouettes of Revolutionary War soldiers holding guns that adorn a new fence surrounding the city's replica of the Liberty Bell.