The sanctification of George Floyd | Theodore Dalrymple | The Critic Magazine 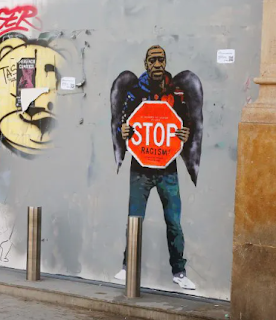 The sanctification of George Floyd | Theodore Dalrymple | The Critic Magazine:
"When I first saw the mural of George Floyd with large angel wings, I assumed that it was a satire on his sanctification – effective, perhaps, but not in the best of taste.
Shortly afterwards, however, I realised that the mural was in earnest: the picture of the mural in the newspaper included a man genuflecting before it and the caption said that he was making a ‘pilgrimage’.
...George Floyd was not a saint; in fact, he was a bad man, and being killed by a brutal policeman does not change a man’s life from bad to good.
He was a man of many convictions – criminal convictions, that is, not political ones – and at least one of his crimes was of deep-dyed malignity.
Along with five others, he broke into a pregnant woman’s house and held her at gunpoint while his associates ransacked the house for drugs and money...
Read all.
Posted by Jim Riley at 4:30 PM