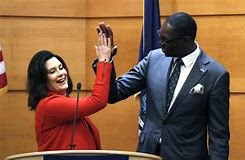 Audit: Michigan May Have Paid Billions in 'Fraudulent' Jobless Claims; Gretchen Whitmer Administration Hit with 'Kickback' Allegations
"An independent audit of the unemployment benefits system found the administration of Michigan Gov. Gretchen Whitmer (D) paid up to $1.5 billion in “fraudulent” claims.
...conducted by Deloitte: “The company interviewed 24 UIA and Department of Labor and Economic Opportunity (LEO) personnel including executive leadership. They reviewed documents, emails, charts, polices, and federal and state UI guidance.”
...The analysis found states were warned in May of “a well-organized Nigerian fraud ring exploiting the Pandemic to commit fraud against various state UI programs.”
Deloitte discovered there may have been “internal fraud” by agency employees and contractors “in exchange for payments and kickbacks”...Read all!
Posted by Jim Riley at 5:30 PM