"...ever wondered what happened to David Bellamy?
"I’m skeptical about man-made climate change. There’s absolutely no proof that carbon dioxide will kill us all. It’s not a poison, it’s the most important gas in the world. Carbon dioxide is an airborne fertilizer. How can farmers grow increasing amounts of food without a rise in CO2?”
"The 80-year old environmentalist and former broadcaster, admitted that his skepticism signaled the end of his career as he had known it.
“From that moment, I really wasn’t welcome at the BBC,” he said.
“They froze me out, because I don’t believe in global warming. My career dried up. I was thrown out of my own conservation groups and I got spat at in London.”
Mr Bellamy said things first began to change in 1996 when he spoke out against wind farms during one of his regular appearances on Blue Peter.
“That was the beginning really,” he told the Daily Mail. “From that moment, I was not welcome at the BBC.”
“I worked with the Wildlife Trusts for 52 years,” he said “And when they dropped me, they didn’t even tell me. They didn’t have the guts.
“I read about it in the newspapers. Can you believe it?
“Now they don’t want to be anywhere near me. But what are they doing? The WWF might have saved a few pandas, but what about the forests?
“What have Greenpeace done?”
Mr Bellamy’s wife Rosemary admitted that they had both been devastated by the developments.
“It did upset us terribly,” she said. “But we pretended not to be upset, didn’t we David? The best thing to do was not to talk about it. So we didn’t.
It’s been very difficult, because he does feel strongly about things.”
Mr Bellamy insisted that he had no regrets about being so outspoken and had not changed his opinions about global warming.
“I still say it’s poppycock,” he said. "For the last 16 years, temperatures have been going down and the carbon dioxide has been going up and the crops have got greener and grow quicker. 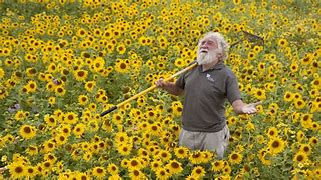 "We’ve done plenty to smash up the planet, but there’s been no global warming caused by man.
“If you believe it, fine. But I don’t and there’s thousands like me."
He added: "Who cares if they’ve put me on the back burner? I can still talk to my flowers, which are all fine and growing amazingly and say, “Thank you very much, David!”
David J. Bellamy OBE (born 1933) is an English professor, botanist, author, broadcaster and environmental campaigner.
Credentials: Honorary Dr. of Science, Bournemouth University (1999), PhD.BSc., OBE., DUniv., FLS.
FIBiol., Sadly died in December 2019 aged 86."
Posted by Jim Riley at 4:30 PM