It worked for the brown-shirts in the 1930s-----'Rabble-rousing idiots': Antifa converge on Western Conservative Summit in Denver - Washington Times 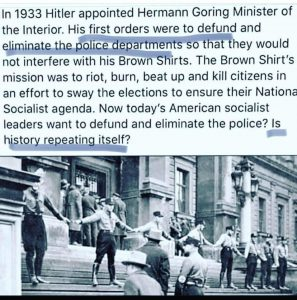 "Antifa activists brought chaos as they descended Friday on the annual Western Conservative Summit in Denver, drawn by favorite targets such as Oregon journalist Andy Ngo and Rep. Lauren Boebert, Colorado Republican.
Videos posted by Mr. Ngo and The Blaze’s Elijah Schaffer showed multiple altercations, including a brawl between a man who confronted dozens of protesters outside the Hyatt Regency Denver, site of the two-day conference hosted by the Centennial Institute.
Protesters, some with bullhorns, harassed people entering and exiting the hotel.
Activists blocked traffic, prompting one driver to jump out of her car and accuse them of throwing a water bottle at her vehicle.
Others chanted “Boebert’s bitch boys” at a line of police outside the venue...Read all.
Posted by Jim Riley at 4:30 PM