What will become of the useful idiots? - American Thinker

What will become of the useful idiots? - American Thinker

"As the Marxist revolution oozes forward, I occasionally wonder what will happen to the useful idiots when the commies seize absolute power in this once great Republic. I believe that most AT readers are familiar with the term, but for those who need a brief refresher, a useful idiot, as defined by Wikipedia, "is a derogatory term for a person perceived as propagandizing for a cause without fully comprehending the cause's goals, and who is cynically used by the cause's leaders." 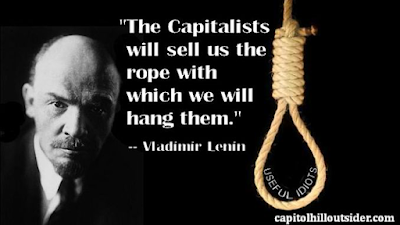 In my opinion, this definition can be applied to a majority of the young, brainwashed radicals who have no idea about the true history of Marxism...or the real history of their native land that they're working so hard to destroy.

We're all aware of the current props being used by the radical left to further their cause — LGBT issues, racism, feminism, slavery, etc. — but how will some of those props fare under a Marxist regime?

...While several websites make vague and inconclusive references to gay and transgender rights in China and Russia, it appears that feminism and homosexuality — and certainly transgenderism — are simply not tolerated.

A look at history supports that conclusion.

In an illuminating article on Frontpagemag, the always incisive Daniel Greenfield (highly recommended...a must-read!) s on this subject...

And how will the myriad of social justice warriors fit in with the new Marxist ruling class?...Read all.