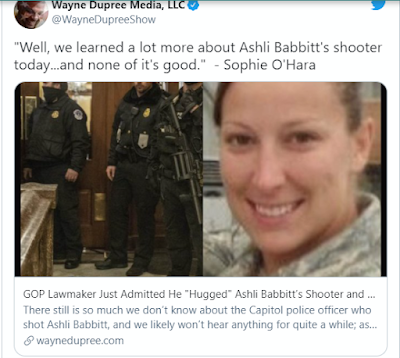 Ashli Babbitt’s Mom: Nancy Pelosi Orchestrated The Killing Of My Daughter
"After nearly eight months of questions and controversy surrounding the events of Jan. 6, the most prominent question remains unanswered: Who killed Ashli Babbitt?
Michelle Witthoeft, Babbitt’s mother, says Speaker of the House Nancy Pelosi is responsible for her daughter’s death.“My daughter was a California constituent, and Nancy Pelosi not only, I feel like, orchestrated the death of my daughter.”
“I’ve reached out to Nancy Pelosi’s office several times, and she has yet to call me back because she’s too busy playing in her clubhouse with all of her elite people,” Witthoeft said.
...“The Capitol Police should be held accountable like every other police department in the country.”...Read all.
Posted by Jim Riley at 10:30 AM