Biden ups the ante: Tells military to get jabbed or face dishonorable discharge 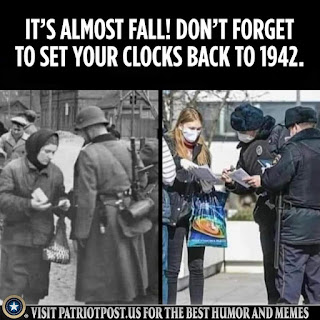 By Christopher Wright
Today, it was reported the Biden administration strongly opposes a bill in the House that would require honorable discharges for departing military personnel who refuse to get the COVID injection. Preventing honorable discharges is not the only way this administration seeks to punish people who won’t willingly lie down in front of Panzer tanks.
Project Veritas just released another video, this one showing an FDA employee calling for forced COVID injections and a registry for all uninjected Americans.
In the video, he talks about how authorities should use drones and shoot darts filled with toxic spike proteins at black people and others who refuse to get it. “l don’t care about your bodily autonomy,” the employee says.
But black people don’t have to worry just yet.
The employee wants to go for white people first, starting with video campaigns, so the feds can’t be accused of racism...Read all!!!
Posted by Jim Riley at 9:30 AM