EVERYONE is LEGAL!!!-----6 things you should know about the Biden Border Crisis.

6 things you should know about the Biden Border Crisis. 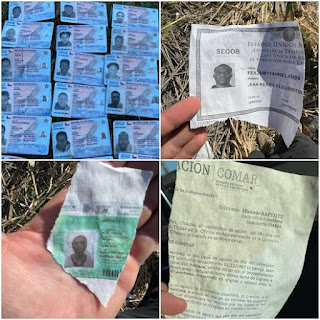 1) Bill Melugin of Fox News posted these photos and wrote, "In Del Rio, near the international bridge, migrants are discarding identification cards and are tearing up travel documents before they are taken into Border Patrol custody." That makes sure they will not be sent back to Haiti.
2) "The Border Patrol is releasing family groups which is often a couple who claims the female is pregnant. All a woman has to do is claim she is pregnant and she will be released.
"They’re just being asked to please report to an immigration office within 60 days.”
3) "In Del Rio, the migrants are being released with NTR’s (notice to return) rather than NTA’s (notice to appear). The NTR is a request to check in with immigration within 60 days. An NTA gives an exact date when they must report. An NTA takes 1 hour to process while an NTR can be completed in 20 minutes."
4) "The Border Patrol is under pressure and they want to get the migrants processed and gone as soon as possible. "When they never show up at an immigration agency or a court date, there is no more law enforcement interaction. There is no way to track them and they are gone into the shadows of the U.S."
5) The situation is awful but according to MRC, TV media coverage of the border crisis has declined by 94%...Read all.
Posted by Jim Riley at 10:30 AM