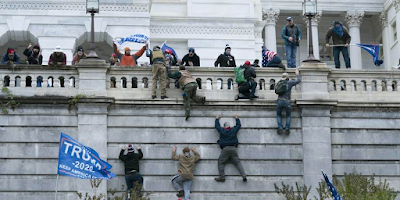 Federal Judge: Capitol Hill Rioters' Charges Might Be Unconstitutional
"There’s going to be a rally in Washington DC this weekend.
It’s why the fencing is going back up around the US Capitol Building.
There have been over 400 arrests stemming from the January 6 riot that has incorrectly been dubbed an armed insurrection.
... And at the end of the day, what occurred were many instances of trespassing on federal property.
Only one person died inside the building.
Her name was Ashli Babbitt, and she was killed by Capitol Police.
...In the meantime, some of the jail sentences prosecutors are gunning for are outrageous.
Now, a federal judge has concerns about the constitutionality of the charges (via The Hill):

A federal judge on Wednesday questioned whether the obstruction of an official proceeding charge that has been levied against at least 235 defendants in Capitol riot cases is unconstitutionally vague...Read all.