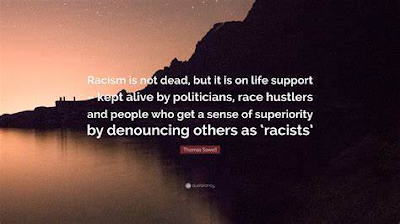 Professor who was suspended after refusing to grade black students more leniently sues UCLA | The College Fix
"An accounting professor who was suspended from UCLA’s Anderson School of Management for refusing to grade black students more leniently in the immediate aftermath of George Floyd’s death has filed a lawsuit against the school for harming his professional reputation.
...Following the death of Floyd at the hands of police in May of last year, Klein received a letter from a non-black student asking that he provide more leniency in grading the work of black students...
Posted by Jim Riley at 4:30 AM