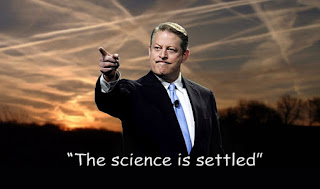 Global Freezing? Climate Science Has Become High Farce - Climate Change Dispatch
"As delegates from the climate conference in Glasgow streamed home in mid-November, with the official start of the Australian summer just days away, Melburnians were freezing, there were floods in NSW and it was snowing in Tasmania.
This is not the climate hell of searing heat and empty dams scientists and activists have been forecasting for the past 30 years and more – the hell which the annual climate summit held in Glasgow was supposed to help the world avoid.
Instead, the wintery weather underlined a basic point that climate activists, including some scientists, are extremely unwilling to acknowledge.
For as well as being extremely variable, weather is subject to climatic cycles that are simply not covered by the allegedly ‘settled, certain’ global warming theory.
After thirty years of doomsaying about climate, these variations can still turn near-summer into winter within days and dictate seasonal rainfall.
...Climate politics has developed into a farce largely unconnected with anything that might actually be happening in climate...Read all.
Posted by Jim Riley at 5:30 PM