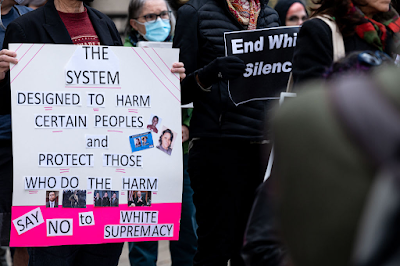 The Cynical and Dangerous Weaponization of the "White Supremacist" Label - by Glenn Greenwald - Glenn Greenwald
"Within hours of the August 25, 2020, shootings in Kenosha, Wisconsin — not days, but hours — it was decreed as unquestioned fact in mainstream political and media circles that the shooter, Kyle Rittenhouse, was a "white supremacist.”
Over the next fifteen months, up to and including his acquittal by a jury of his peers on all charges, this label was applied to him more times than one can count by corporate media outlets as though it were proven fact.
Indeed, that Rittenhouse was a "white supremacist” was deemed so unquestionably true that questioning it was cast as evidence of one's own racist inclinations (defending a white supremacist).
Yet all along, there was never any substantial evidence, let alone convincing proof, that it was true...Read all!!!!!
Posted by Jim Riley at 4:30 PM