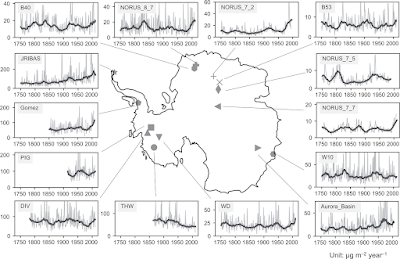 "According to IPCC climate models, the mean global temperature should have risen by 1.5°C since 1850 due to the higher CO2
Now results by a new study appearing in the journal Science Advances by Liu et al tells us that the forcing by aerosols had to have been overestimated by climate modeler's concentrations.
According to the scientists led by Liu, however, atmospheric aerosols in the preindustrial times were just as high as they were just recently.
They were in fact more or less constant over the past 250 years.
No change means it could not have been aerosols putting the brakes on temperature rise.
SCIENCE.ORG
Improved estimates of preindustrial biomass burning reduce the magnitude of aerosol climate forcing in the Southern Hemisphere