What they are forcing on your kids!-----Victory – I’m A Teacher Who Blew The Whistle On CRT In Schools, Suffered Retaliation, But Now I’ve Prevailed

Victory – I’m A Teacher Who Blew The Whistle On CRT In Schools, Suffered Retaliation, But Now I’ve Prevailed
"On July 13, 2021, I blew the whistle at Legal Insurrection on how a new Critical Race curriculum in the Providence, Rhode Island, middle school where I taught was creating racial hostility, turning students and staff against me because I was white, and turning students against their country.
[Video Link] 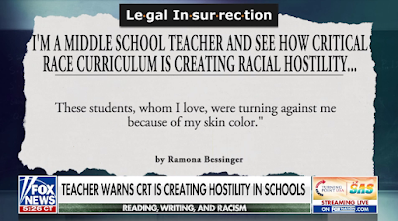 My students, almost all of whom were minority, started calling me “America” because I was white — You are America, they would say, we are not.
How could I keep silent seeing what the Critical Race curriculum was doing to the students and our society?
My story gained national print and television coverage, and even international media attention.
What followed was a year of retaliation, harassment, intimidation, and involuntary transfer to another school where there was no teaching position for me..."
Posted by Jim Riley at 1:30 PM