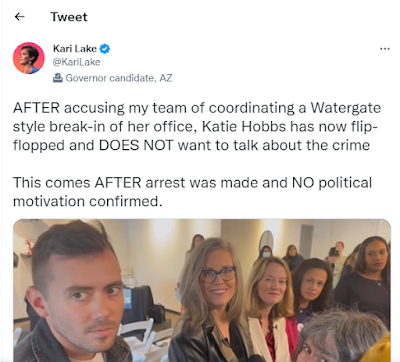 "Democrat Katie Hobbs, Arizona secretary of state and gubernatorial candidate, was quick to amplify claims that “dangerous misinformation” from her Republican opponent Kari Lake was connected to a break-in at her office this week.
Police have now reportedly arrested a suspect and confirmed the break-in had no political motivation...
...Kari Lake shared a video on Oct. 27 of Hobbs nervously refusing to comment or explain after it was reportedly confirmed that the perpetrator of her office break-in was not politically motivated...
Posted by Jim Riley at 10:30 AM