About time!-----Elon Blows Apart Liberal Myth on Ferguson, Makes It Even Better With Big Vow for Twitter

Elon Blows Apart Liberal Myth on Ferguson, Makes It Even Better With Big Vow for Twitter 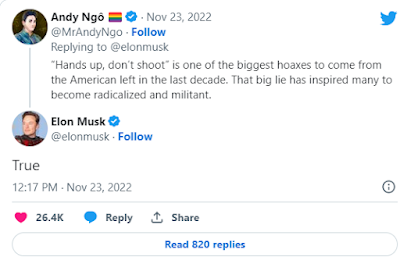 "...Elon Musk discovered “Stay Woke” t-shirts in a Twitter closet as he continues to sort out things at the headquarters....the shirts go back to the time of the shooting of Michael Brown and the protests/riots in Ferguson.
He also linked to the report of the Obama DOJ, noting that the shooting was in self-defense.

That’s not to say that other injustices don’t occur, but this does not appear to be one of them. @CommunityNotes

That set off people on the left even more because they had to deal with the reality that their beliefs that they may have held about that shooting for years were fiction...