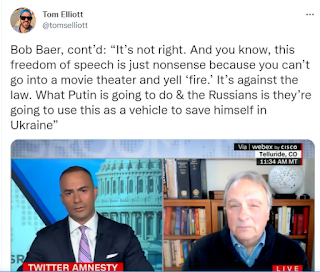 "A CNN analyst aspersed the freedom of speech as "nonsense," and claimed that Vladimir Putin and Russia will be "all over Twitter" dispersing disinformation to the entire world.
Former CIA case officer and current CNN intelligence analyst Robert Baer appeared on the cable news network on Friday to discuss the opening up of Twitter by new CEO Elon Musk.
"CNN Newsroom" host Boris Sanchez began by bringing up the news that Musk plans to grant mass amnesty to accounts that were previously suspended...
Posted by Jim Riley at 4:30 PM