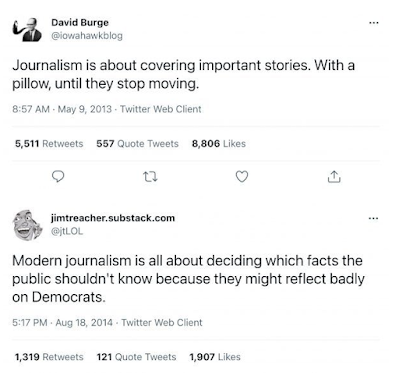 "Probably the truest words I've seen this year.
Rather than deep-dive journalism intended to expose corruption, reveal inconvenient truths, and pull back the green curtain on government's machinations, the legacy press is all about gotcha-gaming the political party they oppose.
By extension, they play gotcha-defense for the home team when their ideological counterparts in the press do it to their favored sons and daughters (and aunts and uncles and other assorted fossils), either by press-splaining gotchas away or by offering up whataboutisms...
Posted by Jim Riley at 9:30 AM